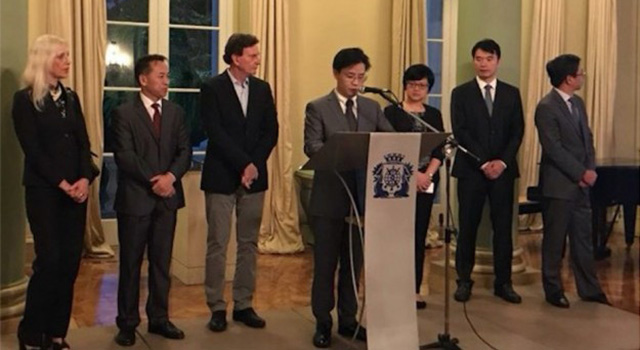 The “China-Brazil Enterprises Economic and Commercial Meeting” was held in Rio de Janeiro on November 21. The event was co-organised by the Permanent Secretariat of the Forum for Economic and Trade Co-operation between China and Portuguese-speaking Countries (Macao), the Macao Trade and Investment Promotion Institute (IPIM) and the municipal government of Rio de Janeiro.

The meeting has focused on strengthening cooperation in capacity production and expanding exports from Brazil.

The Deputy Secretary-General of Forum Macao Mr Ding Tian said in his speech that economic and trade cooperation between China and Brazil remained solid as the two nations have strong markets, albeit against the backdrop of the slow recovery of world economy and a drop in the prices of commodities.

Since its establishment in 2003, Forum Macao has played an active role in promoting and deepening economic and trade cooperation between China and Portuguese-speaking Countries. Forum Macao has successfully convened five editions of Ministerial Conferences and organised various activities that catered to the common interests of the participating countries in Forum Macao.

With Macao’s advantages of having close cultural and linguistic ties to Portuguese-speaking Countries, Forum Macao’s platform role has proven to be irreplaceable as it strengthened the economic and cultural exchanges between China and Brazil. It is anticipated that more cooperation in trade, investments and capacity production will be realised between China and Brazil under the multilateral cooperation mechanism provided by Forum Macao.

Macao has an important role in fostering cooperation between China and Brazil with its advantages in terms of culture, language and human resources, as well as its position as a major international commercial port, Mr Li said in his speech. He also added that there was further room for Macao to make use of its advantages as China is on track to open up its market.

At the meeting, Mr Crivella introduced the role of Rio de Janeiro to the business representatives attending the meeting. He has also expressed hope that Rio de Janeiro can go forward with optimising public infrastructure and public security, so as to create good conditions for attracting more Chinese investments and to have the city become a part of China’s “Belt and Road” initiative.

More than 10 business-matching sessions were held during the event, connecting representatives from Chinese and Brazilian companies.