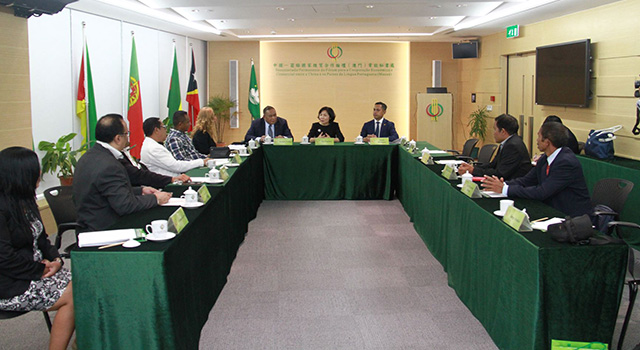 The Chairperson of the Committee for Constitutional Affairs and Justice of Timor-Leste’s National Parliament, Ms Carmelita Caetano Moniz, visited on September 2 the facilities of the Permanent Secretariat of Forum Macao. She was accompanied by the Ambassador to China of Timor-Leste, Mr Bendito dos Santos Freitas.

Secretary General Xu welcomed Committee Chairperson Ms Caetano Moniz and gave a brief presentation on the work done by the Permanent Secretariat of Forum Macao, as well as on Macao’s role as a cooperation platform. She underscored the Permanent Secretariat’s commitment to strengthening economic and trade cooperation between China and the Portuguese-speaking Countries. In that regard – Ms Xu explained – Forum Macao had been carrying out numerous exchange activities in various areas, including economic and trade relations, human resources, tourism and culture.

Ms Xu noted that, as a developing country, Timor-Leste had huge potential for further cooperation with China. She took the opportunity to emphasise Forum Macao’s willingness to support Timor-Leste to make the most of Macao’s platform role and Forum Macao’s multilateral cooperation mechanism, in order to drive and boost cooperation between the country and China in various areas.

Committee Chairperson Ms Caetano Moniz thanked the Permanent Secretariat for its warm welcome, then made a presentation on the organisation and goals of the Committee for Constitutional Affairs and Justice. She said her visit to Macao aimed to boost cooperation and promote exchanges with Macao’s judicial and legislative bodies, namely by gaining further insight into the city’s legal framework regarding the requirement for public officials to declarate their assets and interests. This would help to further legislative work for an anti-corruption law in Timor-Leste. She also expressed her appreciation for Macao’s role as a platform to promote cooperation between China and Portuguese-speaking Countries.