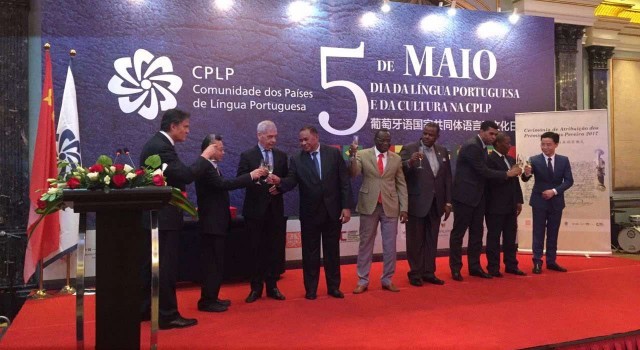 Brazil is currently holding the presidency of the CPLP, an office that rotates among the members. Brazil’s Ambassador to China, Mr Marcos Caramuru de Paiva, inaugurated the ceremony in Beijing. He delivered an important speech on the relevance of the Portuguese Language, while thanking the Permanent Secretariat of Forum Macao for the great support given to the initiative. It is hoped the event could be held annually in Beijing on May 5, with the joint support of Portuguese-speaking Countries’ diplomatic representatives.

Following the speech of Portugal’s Ambassador to China, a ceremony was held to deliver the “2017 Tomás Pereira” awards. They aim to recognise the best Chinese students learning the Portuguese language in one of the 25 universities in China in which the subject is taught.

Mr Ding Tian, Deputy Secretary General of Forum Macao, reiterated the importance of the Portuguese Language and Culture Day in the promotion of exchanges between China and Portuguese-speaking Countries. He said it helped enhance friendly relations between peoples, while offering solid ground to enhancing economic and trade co-operation between all parties involved. He also highlighted the commitment of Forum Macao in continuing to promote exchanges and linguistic and cultural co-operation.

The Permanent Secretariat of Forum Macao installed a stand there, as well as billboards aimed at showcasing products from the Portuguese-speaking Countries Food Products Exhibition Centre.

A book titled “Projecto Libolo,” by Mr Carlos Figueiredo, was also presented at the event. The book resulted from research on Angola conducted at the University of Macau.

The support provided by the Permanent Secretariat of Forum Macao to CPLP’s Portuguese Language and Culture Day demonstrates China and Macao SAR’ commitment in strengthening co-operation ties with Portuguese-speaking Countries, by making use of Macao as an economic, trade and cultural services Platform.