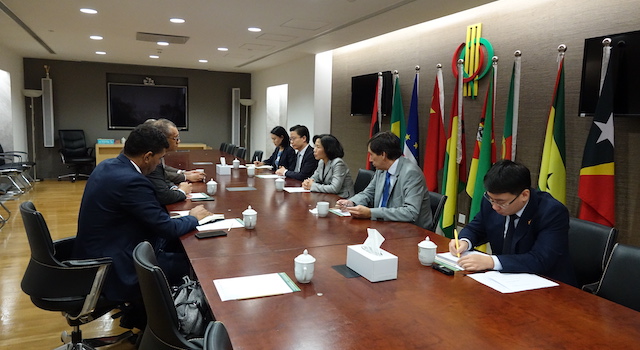 A delegation led by the Minister of Industry, Trade and Energy of Cabo Verde, Mr Alexandre Monteiro, visited on October 18 the facilities of the Permanent Secretariat of Forum Macao, and met with Secretary-General Ms Xu Yingzhen. The meeting was also attended by Deputy Secretaries-General Mr Ding Tian and Mr Rodrigo Brum, and by the Representative of Cabo Verde at the Permanent Secretariat of Forum Macao, Mr Nuno Furtado.

Ms Xu welcomed the Cabo Verde delegation to the Permanent Secretariat of Forum Macao. She said Forum Macao was committed to promoting cooperation between China and the Portuguese-speaking Countries in a number of fields, including: economic and trade matters; investment; human resources; culture; education; and collaboration between cities and provinces of the participating countries in Forum Macao. Such initiatives would boost further the positioning of Macao as a cooperation platform between China and the Portuguese-speaking Countries.

Ms Xu noted that Cabo Verde had been actively taking part in Forum Macao’s work. She hoped that – via its participation in the 24th Macao International Trade and Investment Fair, also known as MIF – Cabo Verde could take advantage of Macao’s positioning as a cooperation platform, in order to expand the scope of Cabo Verde’s collaboration with China, namely in economic and trade matters, human resources, and traditional medicine.

Minister Mr Monteiro expressed his gratitude for the warm welcome by the officials from the Permanent Secretariat of Forum Macao. He noted that Forum Macao was an important multilateral mechanism to promote economic and trade cooperation between China and the Portuguese-speaking Countries. The Minister added that his country recognised the importance of Macao’s role as a cooperation platform, and would continue to take advantage of such a platform to promote Cabo Verde to a larger number of people.

In addition, the Minister expressed his gratitude for the invitation to attend the music and dance gala of the 11th Cultural Week of China and Portuguese-speaking Countries, an event organised by Forum Macao. Mr Monteiro noted that cultural exchanges could contribute to improving mutual understanding and trust between people respectively from China and from the Portuguese-speaking Countries, contributing to economic and trade cooperation between the two sides. He also highlighted the active participation of enterprises from Cabo Verde at this year’s edition of MIF, which he said had a positive impact on economic and trade cooperation promotion between Cabo Verde and China.

During the meeting, the two sides also exchanged views on preparatory work for the 6th Ministerial Conference of the Forum Macao, to take place in 2020.