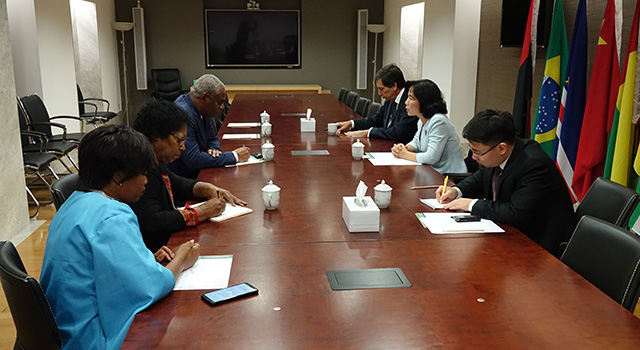 During the meeting, the two sides exchanged views on promoting cooperation on traditional medicine within the scope of Forum Macao’s role, and via Macao’s positioning as a cooperation platform between China and the Portuguese-speaking Countries.

Ms Xu welcomed Mr Rosário to the Permanent Secretariat. His visit followed Mr Rosário’s participation in the 2019 Traditional Medicine International Cooperation Forum (Macao, China). Ms Xu recognised the great support provided by Cabo Verde in regard to boosting cooperation with the Traditional Chinese Medicine Science and Technology Industrial Park of Co-operation between Guangdong and Macao. She also expressed gratitude for the support provided by the Government of Cabo Verde to the work of Forum Macao.

Mr Rosário said his country considered Forum Macao and Macao’s role as a cooperation platform to be of great importance. He also recalled that in May, the Ministry of Health and Social Security of Cabo Verde and the Traditional Chinese Medicine Science and Technology Industrial Park had signed a memorandum of understanding on bilateral cooperation in the field of traditional medicine.

The Cabo Verde official said his country wished to combine traditional medicine with conventional medicine, in order to optimise its national public health system. In addition, Mr Rosário said Cabo Verde hoped further to cooperate with the Traditional Chinese Medicine Science and Technology Industrial Park: the aim would be to set up a traditional medicine studies centre in the African country, in order gradually to improve legislation and human resource training in this field, as well as the availability of supporting infrastructure, including hospitals and health centres.

Brazilian Ministry of Health plans to purchase vaccines from China