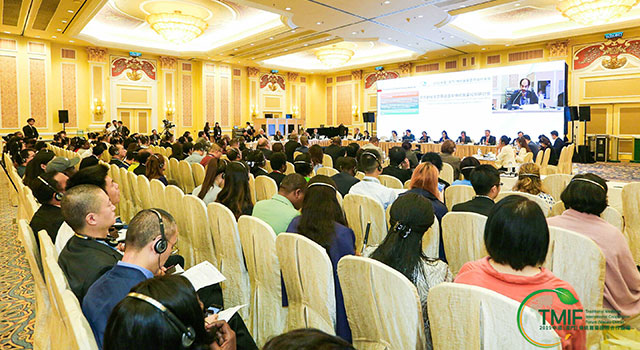 This year’s edition of the forum – themed “Sharing Achievements of Traditional Medicine, Deepening International Exchange and Cooperation” – was attended by participants respectively from: Mainland China; the Macao SAR; the European Union; member countries of the Association of Southeast Asian Nations; and the Portuguese-speaking Countries. During the event, participants discussed topics related to cooperation and development in traditional medicine.

Forum Macao’s Secretary-General Ms Xu noted in a speech delivered at the seminar, that Macao had included development of its traditional Chinese medicine industry in the city’s strategic vision for growth. She added that Macao – as a Commercial and Trade Cooperation Service Platform between China and Portuguese-speaking Countries – offered advantageous conditions for promotion of traditional medicine and industrial cooperation in this field. In addition, Ms Xu hoped that cooperation in traditional medicine could become an important element in the sharing of knowledge between people from different cultures.

The President of the Guangdong-Macao Traditional Chinese Medicine Technology Industrial Park Development Co., Ltd, Ms Lu, said the industrial park played a significant role as a supporting base and development platform for Macao’s traditional Chinese medicine industry. She added that the park would continue – as stated in the Policy Address of the Macao SAR Government, and within the scope of the Guangdong-Hong Kong-Macao Greater Bay Area project and of the national “Belt and Road” initiative – to promote the benefits of links with Portuguese-speaking Countries, in order to contribute to Macao’s adequate economic diversification.

Cooperation related to health matters is one of the key topics in the Strategic Plan for Economic and Trade Co-operation of the 5th Ministerial Conference of Forum Macao. In that regard, the Business Matching Forum – Seminar on Economic and Trade Cooperation of Portuguese-speaking countries in Traditional Medicine, included in the 2019 Traditional Medicine International Cooperation Forum (Macao China), was of great relevance.