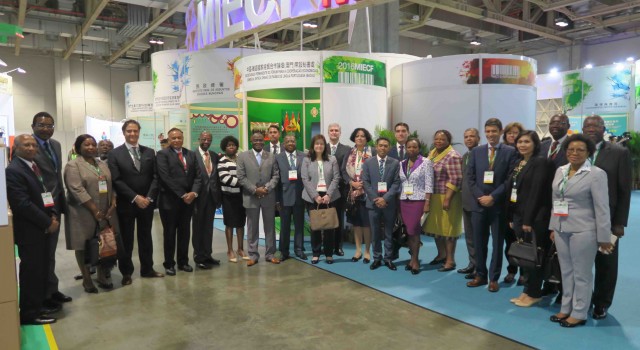 A delegation of the Permanent Secretariat of the Forum for Economic and Trade Co-operation between China and Portuguese-speaking Countries (Macao), the Ambassadors to Beijing from Portuguese-speaking Countries and other guests, on March 31 participated in the opening ceremony of the 2016 Macao International Environmental Co-operation Forum and Exhibition for Environment (MIECF). The delegation also visited the Forum Macao stand at the exhibition.

The Permanent Secretariat once again set up the Forum Macao stand at the annual MIECF event. The stand provides information about Portuguese-speaking Countries presented to the public in the form of photographs, publications, videos and digital material. The stand also helps to promote these countries’ business and investment environments.

Bilingual staff are there to help visitors to the stand for the duration of MIECF. Visitors will have an opportunity to communicate face-to-face with representatives from the Permanent Secretariat of Forum Macao.