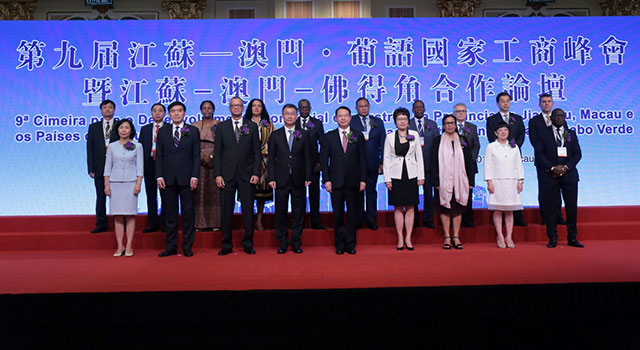 The joint opening ceremony for the 9th Summit for Commercial and Industrial Development of Jiangsu, Macao and Portuguese-speaking Countries, and for the Jiangsu, Macao and the Cabo Verde Co-operation Forum was held in Macao on October 17. The concurring Summit and Co-operation Forum were organised by the Jiangsu Provincial People’s Government in collaboration with the Permanent Secretariat of Forum Macao.

Officiating guests attending the opening ceremony included: Jiangsu Vice Governor Mr Guo Yuanqiang; Deputy Director-General of the Liaison Office of the Central People’s Government in the Macao SAR, Mr Yao Jian; Deputy Commissioner of the Office of the Commissioner of the Ministry of Foreign Affairs of the People’s Republic of China in the Macao SAR, Ms Wang Dong; the Minister of Industry, Trade and Energy of Cabo Verde, Mr Alexandre Dias Monteiro; the Minister of Education of Cabo Verde, Ms Maritza Rosabal Peña; the Secretary-General of the Permanent Secretariat of Forum Macao, Ms Xu Yingzhen; the President of the Macao Trade and Investment Promotion Institute, Ms Irene Va Kuan Lau; members of the diplomatic corps in Beijing representing Portuguese-speaking Countries; and members of the consulates in Macao representing Portuguese-speaking Countries.

In a speech at the opening ceremony, Secretary-General Ms Xu said strengthening collaboration between provinces and municipalities of the participating countries in Forum Macao was an important task as part of the overall goal of boosting cooperation between China and the Portuguese-speaking Countries. She said Forum Macao would continue to encourage Mainland China provinces and Portuguese-speaking Countries to make the most of Macao’s role as a cooperation platform, in order to enhance mutual understanding, deepen contacts and explore further collaboration opportunities.

Ms Xu added that Forum Macao would continue to promote cooperation between respectively mainland Chinese provinces and municipalities (including Jiangsu province), Macao and Portuguese-speaking Countries, in order for all parties to explore jointly business opportunities and thus reach a new level of mutually-beneficial collaboration.

A total of eight editions of the Summit for Commercial and Industrial Development of Jiangsu, Macao and Portuguese-speaking Countries had been held since its establishment in 2011. A Summit Council was also set up, as well as six Working Groups for promotion of cooperation covering respectively: investment and trade; education; agriculture; tourism; deep-sea fishing; and infrastructure construction. Such initiatives have made trilateral cooperation between Jiangsu, Macao and Portuguese-speaking Countries more pragmatic and efficient, allowing for good results and positive outcomes.

As a participating country in Forum Macao, Cabo Verde has been cooperating closely and effectively with China in various areas such as trade, agriculture, the maritime economy, infrastructure, traditional medicine and human resources.