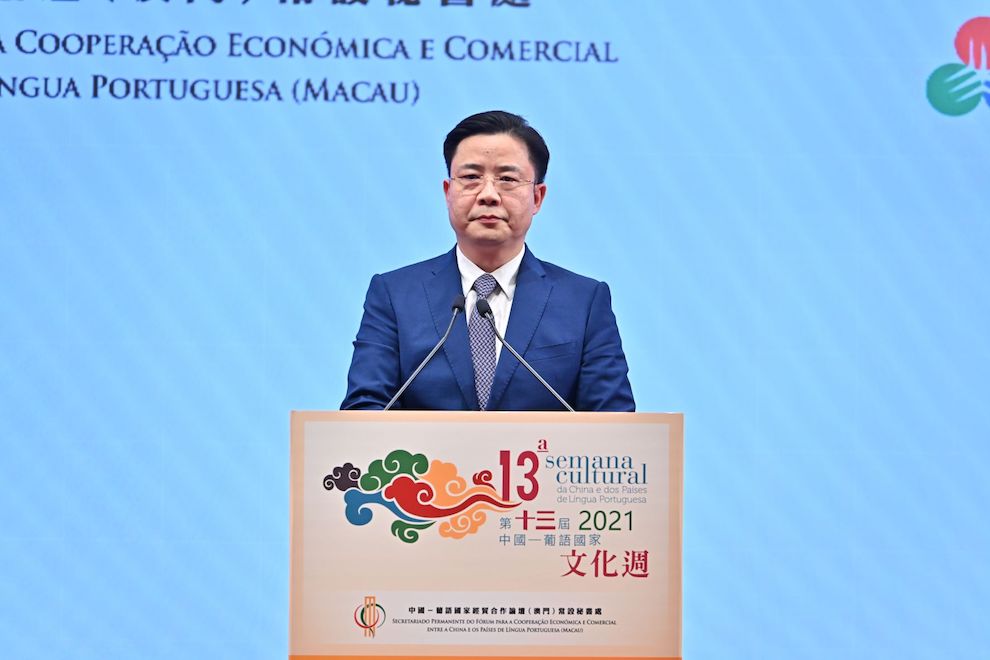 Deputy Secretary-General Mr Ding pointed out in his remarks during the opening ceremony that cultural and artistic exchanges emphasised – particularly amid the COVID-19 pandemic – the importance of building a community with a vision for a shared future for mankind. He said the Permanent Secretariat of Forum Macao would continue its efforts to promote exchanges between the peoples of China and Portuguese-speaking Countries. Mr Ding also said Forum Macao remained open to working with all parties in order to foster cultural and other exchanges between mainland China, Macao, and Portuguese-speaking Countries.

During the Cultural Week of China and Portuguese-speaking Countries, a virtual platform is being used to bring to the public 18 performances in aggregate from among the nine member countries of Forum Macao. These are: China (represented by Anhui province), Angola, Brazil, Cabo Verde, Guinea-Bissau, Mozambique, Portugal, São Tomé and Príncipe, and Timor-Leste. The spectacles include music and dance performances, work from Anhui’s Huangmei Opera, theatre plays, tourism and traditional culture presentations, handicraft shows, and showcases of the cuisine of Portuguese-speaking Countries.

The award ceremony for the Contest for Promotional Videos on Portuguese-speaking Countries, a competition jointly hosted by the Permanent Secretariat of the Forum Macao and the Macao Polytechnic Institute, and aimed at students, was held following the opening of the Cultural Week. Despite the pandemic, the competition was held successfully. More than 180 students from over 20 higher education institutions in mainland China, Portuguese-speaking Countries and Macao applied for the contest, submitting 50 pieces of work in total.

After an evaluation, entries from 23 teams were selected as finalists, and six entries made it onto the award shortlist. They were: ‘I am waiting for you in Angola’; ‘Brazilian Coffee’; ‘Guinea Bissau’; ‘One day in Portugal’; ‘Hello! My name is São Tomé and Príncipe’; and ‘In Timor-Leste there is a fantastic legend tale’. The entry ‘I am waiting for you in Angola’ from the team from East China Jiaotong University, in Jiangxi province, received the most votes online. The winners briefly commented on the awards during the ceremony. All 6 award shortlisted entries can be viewed online, enabling the public to experience the charm of Portuguese-speaking Countries, and to learn more about their customs and traditions.